Breaking News
2020 【犬が守る】犬が🐶💪人間の赤ちゃんを守ろうと必死な映像 👶！
Back To Life – New Bondi Vet Song
Climate Change: Why Farmers Are Among Our Best Guides for Making Sense of Topsy-Turvy Weather
Country diary: preparing the garden for a much-loved mammal
Skip to content

Capybaras, the world’s largest rodents, are also among the cutest and chillest animals on the planet. But now there’s one more positive to add to that list. 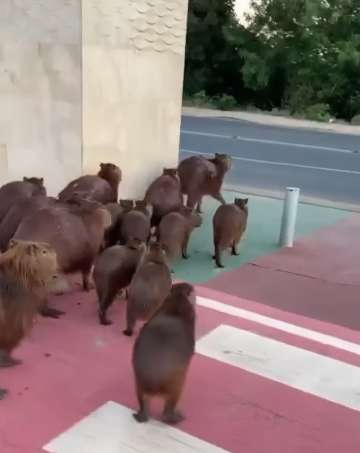 Earlier this month, passersby in Cuiabá, Brazil, happened upon a curious and adorable scene. A large group of capybaras, big and small, were gathered patiently near a crosswalk along a busy three-lane road.

But what were they doing there? Well, you’ll see.Here’s that moment on video:Turns out, the clever capybaras were waiting patiently for a break in traffic so the whole family could safely cross — evidently, having figured out the rules of road safety.

Climate Change: Why Farmers Are Among Our Best Guides for Making Sense of Topsy-Turvy Weather